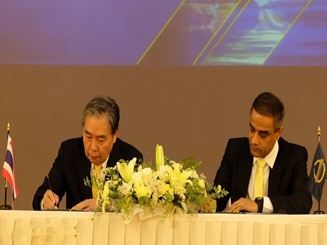 The Asian Development Bank (ADB) and the Government of Thailand today signed a $99.4 million loan agreement to help the country upgrade 125 kilometers (km) of highways and improve road safety management in the country’s north eastern region. The agreement was signed by Thailand’s Finance Minister and ADB Governor Mr. Apisak Tantivorawong and ADB Director General for Southeast Asia Mr. Ramesh Subramaniam. Minister of Transport Mr. Arkhom Termpittayapaisith, senior officials, and representatives from the Public Debt Management Office under the Ministry of Finance and Department of Highways under the Ministry of Transport also witnessed the signing ceremony in Bangkok.

“Transport infrastructure is an important driver of growth for Thailand’s economy,” said Mr. Subramaniam. “Improving the country’s road network will boost economic growth and improve people’s access to economic opportunities and social services. It will also help Thailand become a trading and economic hub in the Greater Mekong Subregion (GMS).”

The project follows the success of the ADB-supported GMS Highway Expansion Phase 1 Project in 2009, which upgraded 178 km of an existing two-lane national highway to a four-lane divided standard, including Highway 12 between Phitsanulok and Lom Sak (105 km) and Highway 359 from Phanom Sarakham to Sa Kaeo (73 km). These two routes link to the GMS East–West Economic Corridor and the GMS Southern Economic Corridor, respectively.

The GMS Highway Expansion Phase 2 Project will upgrade Highway 22 (Nong Han to Phang Kon and Sakon Nakhon to Nakhon Phanom) and Highway 23 (a section from Roi Et to Yasothon) from two-lane highways to four-lane highways. The project will result in a more efficient and safe transport network for both goods and people. It will also help the government improve road safety and management through safety awareness training and knowledge sharing in road safety audits.

The project is ADB’s first sovereign lending to Thailand with a special financing arrangement, supporting the government’s efforts to effectively manage the foreign exchange risk exposure. The project is expected to be completed in the first quarter of 2022.

ADB, based in Manila, is dedicated to reducing poverty in Asia and the Pacific through inclusive economic growth, environmentally sustainable growth, and regional integration. Established in 1966, it is owned by 67 members—48 from the region. In 2017, ADB operations totaled $32.2 billion, including $11.9 billion in co-financing.

Your Image Is Not Your Brand

For the latest postpaid clients, Etislat as well as Du to...

Digitalization to be the powerhouse for majority of the Middle Eastern...

Maintenance of equilibrium in the era of FinTech Revolution with Security...

In GCC area for protection of Online Shoppers, Mastercard has rolled...