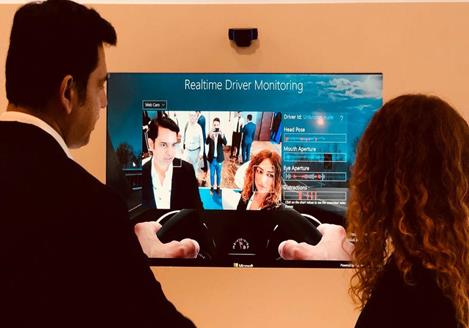 The first thing to greet you at the door of the Dubai Electricity and Water Authority’s Customer Happiness Centre at Ibn Battuta Mall is Rammas.

He does not take any breaks, is active throughout the day and solves most of the problems he’s confronted with in mere seconds. Rammas also does not blink.

Because of his super-intelligence and boundless memory, Rammas is attracting not only Dewa customers but others passing by the centre at the mall – at least for a selfie.

Rammas is no super-human. He (or rather “it”) is a robot that runs on artificial intelligence.

The UAE economy, the Arabian Gulf region’s second largest, is forecast to grow the most in the region as a result of AI adoption, with this cutting-edge technology expected to contribute up to 14 per cent to the country’s GDP – equivalent to Dh352.5 billion – by 2030, according to a report by PwC.

The Emirates will see 33.5 per cent average annual growth in private and public sector AI applications, between 2018 to 2030, which is the highest in the region. The annual growth in Saudi Arabia and Egypt is expected to be at 31.3 and 25.5 per cent, respectively, according to PwC.

Top executives in the Middle East express optimism and willingness to adopt more automated solutions in the coming years.

“We see an above-average willingness to evaluate and adopt AI to digitise both public and private sector operations in this region,” says Necip Ozyucel, cloud and enterprise group lead at Microsoft Gulf.

In its recent report, Microsoft says that 29 per cent of large enterprises in the Gulf region are planning to adopt AI technologies in 2018.

targets were predictive analytics (21 per cent), and robotics and machine automation (14 per cent).

The Middle East and Africa region’s investment in AI is forecast to reach $114.22 million by 2021, representing a compound annual growth rate of 32 per cent for the 2016-2021 period, according to the US research firm International Data Corporation.

“Businesses will invest significantly in AI to grow the capabilities of employees in terms of productivity and efficiency,” says Paul Potgieter, managing director of IT services company Dimension Data, UAE.

AI helps machines or devices to think and react like humans and interpret emotions. AI-enabled devices can even predict the future by taking into account simple gestures like speech, facial impressions and hand movements, or by reviewing stacks of data in just seconds.

“We must work to democratise AI and ensure that its development and applications are based on the right ethics and standards,” says Mr Ozyucel. “That is where close collaboration between governments and technology providers becomes critical.”

In a survey of senior executives, 53 per cent in the Mena region say that AI and robotic process automation are the most prominent technologies on their boardroom agendas – compared to 46 per cent globally, says EY.

“In the past, anyone who wanted to use AI had to start from scratch, develop algorithms and feed them with enormous amounts of data. Today, AI technologies are available on the [Amazon Web Services] cloud, at the click of a mouse, and they can be called up according to individual requirements,” says Vinod Krishnan, head of commercial sector for Mena at Amazon Web Services (AWS).

“In particular, start-ups can benefit as they do not have to learn any complex AI algorithms and they can start experimenting straight away without incurring high costs.”

Start-up Mawdoo3 in Jordan, provides one of the largest Arabic-language content platforms, is running its AI initiatives on AWS, giving website visitors new ways of accessing information and a faster experience.

experts believe an increasing number of enterprises will adopt ai in the wake of ever-changing customer behaviours and shifting demographics.

This shift will help to boost margins, customer service and efficiency by supplementing some human activities with technology.

Currently, the financial services sector is among the most advanced in the adoption of intelligent automation technologies. Banks are utilising their up-to-date data storage to provide end-to-end services for customers by using AI applications.

“Governments and businesses across the Middle East are beginning to realise the shift towards AI,” says Richard Boxshall, senior economist at PwC Middle East.

“They are faced with a choice between being a part of the technological disruption, or being left behind.”