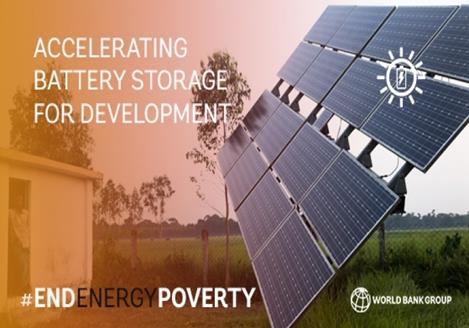 Renewable energy sources, including solar and wind, accounted for almost two-thirds of net new power capacity around the world in 2016, with almost 165 gigawatts (GW) of power coming online in 2016. Renewable electricity capacity is also forecast to expand by over 920 GW between 2017 and 2022.

While solar and wind energy are starting to see more and more uptake, there is no widespread solution in place to store the electricity they produce and use it when it is needed most. Energy storage – batteries in particular — can help solve that problem.

But battery technology is expensive and not yet widely deployed in large-scale projects. The gap is particularly acute in developing countries, where wind and solar power have great potential, energy demand is growing, and where large populations often live without reliable, affordable electricity.

“Accelerating Battery Storage for Development” is a new, first-of-its-kind global program to accelerate the deployment of battery storage for energy systems in developing and middle-income countries. It is expected to help countries ramp up their use of renewable energy, increase grid stability and help them leapfrog to a new generation of energy technology.

The WBG is committing $1 billion in financing for the program, which was announced by WBG President Jim Yong Kim at the One Planet Summit in New York.. It also aims to fundraise $1 billion in concessional climate funds, through channels such as the Climate Investment Funds’ Clean Technology Fund (CTF), and mobilize at least another $3 billion from the public and private sectors. The goal is to finance 17.5 gigawatt hours (GWh) of battery storage by 2025 – more than triple the 4-5 GWh currently installed in all developing countries.

“We are seeing historic low prices for solar and wind energy, and countries want to use as much of it as possible to meet their energy needs, But to make full use of solar and wind power, we need at-scale and affordable battery storage. Our goal is to catalyze new markets that will help drive down costs and make batteries a viable storage solution for developing countries.”

The World Bank is already taking steps to address this challenge – having financed over 15% of the grid-related battery storage in various stages of deployment in developing countries to date. This includes a combined solar energy and battery storage project in Haiti and an emergency solar and battery storage power plant in the Gambia and many mini-grids across the globe.

It has also been working with other countries to support the deployment of batteries with solar and wind power in recent years, with projects currently under preparation in Africa, South Asia, Latin America and the Caribbean and the Pacific

Through the newly announced battery storage program, the WBG will provide investment support for renewable energy projects – such as hybrid solar parks and mini-grids – to buy down the cost and risk of battery storage components.

It will also convene a global think tank on battery storage, bringing together national laboratories, research institutions, development agencies and philanthropies to foster international technological cooperation and training to develop and adapt new storage solutions that are tailored to the needs and conditions of developing countries.

KGISL Completes Acquisition of AETINS Enters a new geography, the UAE market and a...

87% OF LARGE COMPANIES HAVE ALREADY INVESTED IN MACHINE LEARNING OR PLAN TO DO...

FLOWS TO EUROPEAN ETFS PICK UP PACE IN THE THIRD QUARTER