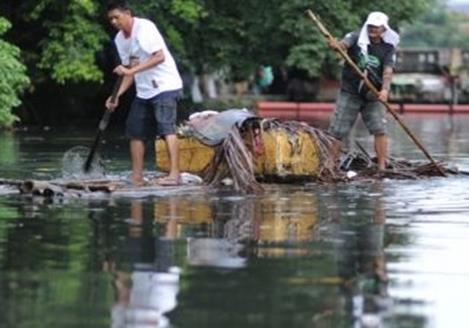 Across much of Asia the monsoon rains have arrived. They bring cool relief as each drop of rain rejuvenates parched gardens, reviving the dry and dusty trees offering precious shade in our concrete mega cities.

This relief, however, is often short-lived. In many cities around the region, water is not absorbed due to heavily built-up urban areas, choking the rivers, estuaries, streams, lakes, and wetlands that act as natural water channels of the urban watershed. As a result, the sombre reality of conserving nature and optimizing resources looms with more urgency than ever before.

Not long ago, development priorities swerved toward promoting the so-called “green economy.” The Sustainable Development Goals further strengthened that momentum by articulating goals and targets to guide environmentally-sensitive and equitable growth.

The journey is complicated by rapidly dwindling natural resources from unsustainable consumption patterns as countries urbanize and grow wealthier. A direct result is continuous generation of waste.

Even if consumption patterns are altered and waste generation minimized, waste creation will never cease.

In both rich and poor countries, about 59% goes into landfills, leaving a growing share of scarce and valuable land unproductive. Organic trash, food we or animals eat, and horticultural waste makes up about half of global solid waste. Paper and plastic represent 27%.

Pollution from trash dumping in waterways and on land spreads food and water-borne disease like hepatitis B and C, dysentery, cholera, typhoid fever, among others.

There is however, a silver lining to this “brown economy.” Waste can be an asset. Not making the most of it is a missed opportunity.

INCLUDE NATURAL WATER CHANNELS IN URBAN PLANNING TO OPTIMIZE LAND USE

Better waste management needs to be evaluated seriously in an integrated manner, with an emphasis on co-benefits. Solutions cannot come from one agency or within one sector alone, but rather across vertical and horizontal layers of governments, across sectors and within communities.

Although environment protection laws provide an anchor, the responsibility for managing waste lies with local governments, which are often constrained by skills, staffing levels and finances. Policies and regulations need to be accompanied by behaviour change to address the root cause of the garbage problem.

In cities, co-benefits of integrating the natural network of water channels within a master plan framework would optimize land use and create an alternative transport network.

Metro Manila produces one-fourth of the country’s daily output of solid waste, according to the Department of Environment and Natural Resources. The increase in trash cost taxpayers P1.84 billion ($34.5 million) in tipping fees alone.

The Philippine capital’s urban watershed constitutes around 273 esteros, creeks, and tributaries. These are clogged with waste and heavily encroached by informal settlers and commercial establishments, which constrains water absorption leads to frequent flooding. The virtual disappearance of esteros deprives the city of potential water transport which would ease traffic congestion. A co-benefit of cleaning up the esteros would be easier water run-off and reduced flooding.

In New Delhi India, the “nallah” network—350 kms of natural drainage—is full of garbage, silt, sewage, and sludge. It is heavily encroached by informal settlements and over 280 hectares of land around the drains is not utilized.

Co-benefits of clearing this network would include walking and cycling paths for commuters, and reduced pollution through effective drainage, Moreover, it would recharge depleted ground water levels and enhance tourism. Some nallahs are 700 years old, and connect many of the city’s famous archaeological sites.

Similar approaches could be taken at other cities across the region. In fact, not doing so is a further missed opportunity to leverage advances in technology and reinforce global commitments to innovate and provide financial incentives for resource recovery.

One way of grasping such opportunities is through “Green” city action planning. This approach is based on the “3 Es” principles (environment, economy and equity), which can facilitate a shift towards monetizing waste in ways that optimize our environment assets while providing economic gains and equitable benefits.

The 3 Es encourage the optimization of the natural environment through master planning that integrates built and natural infrastructure and resource recovery through effective recycling of scrap metal, paper, glass, plastics and cardboard. This is already a large industry in many developed countries, but yet to take off in the developing world.

Waste to energy conversion for industry, residential and commercial use particularly for power generation and cement kilns should be a priority. This also enables companies to reduce their carbon footprint and access carbon credits.

The economic gains of better waste management are far-reaching and include:

Landfills should be the absolute last option to limit their impact on people and the environment. Innovative financing and structuring co-benefits can incentivize policy makers, practitioners and citizens for mutual benefits and improved quality of life that green, resilient cities can produce.

The best and fascinating part is that the robust emergence of...

Investment between Dubai platform attracts 3,746 Investors out of 77 Nations

A Deal had been signed between EDB as well as Dubai’s...

MENA INVESTORS HAVE A KEY ROLE IN THE DRIVE TOWARDS NET...