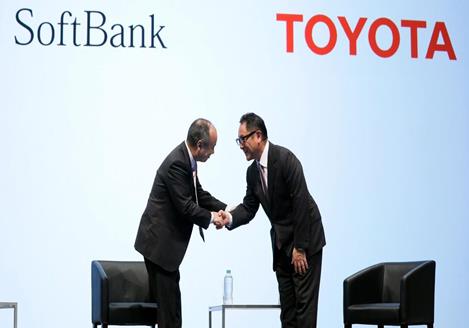 The JV starts with $17.5 million in capital and Softbank holding a 50.25 per cent stake

Japan’s No 1 automaker Toyota and technology giant SoftBank Group are setting up a joint venture to create mobility services in what they called a “united Japan” effort to face global competition.

The 2 billion yen ($20 million) venture, Monet Technologies is meant to be running by the end of March.

It will work on on-demand vehicle services, food deliveries, data analysis and hospital shuttles with onboard medical exams, the companies said Thursday in a news conference at a Tokyo hotel.

“Many of you here may be asking why Toyota and SoftBank?” Toyota chief executive Akio Toyoda said of the odd-couple union of an old-style manufacturer with a relative newcomer like SoftBank.

The energy and telecoms company’s past tie-ups have tended to be with overseas startups. But Softbank has also invested in leading car-sharing companies like Uber, Didi and Grab, and has acquired Arm, a leader in the Internet of Things, or IoT.

Toyoda stressed the auto industry was changing in an era of connected cars, autonomous driving, car-sharing and electric vehicles.

Middle East’s as well as North Africa’s ridesharing recovery is all...

The AI industry can unearth $1Trn annually assets for Banking and...

In 2019 UAE witnessed its advancement as an AI leader, however,...