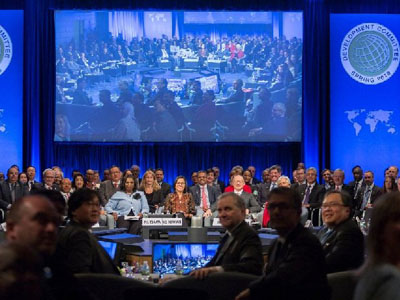 The World Bank Group’s shareholders endorsed an ambitious package of measures that include a $13 billion paid-in capital increase, a series of internal reforms, and a set of policy measures that greatly strengthen the global poverty fighting institution’s ability to scale up resources and deliver on its mission in areas of the world that need the most assistance.

The package agreed by the Development Committee of the Board of Governors consists of $7.5 billion paid-in capital for IBRD and $5.5 billion paid-in capital for IFC, through both general and selective capital increases, as well as a $52.6 billion callable capital increase for IBRD. The boost in capital will be augmented by a broad range of internal measures including operational changes and effectiveness reforms, loan pricing measures, and other policy steps to create an even stronger World Bank Group.

The capital package for IBRD and IFC agreed builds on the strong commitment of contributors to IDA, as demonstrated in the IDA18 replenishment, the successful launch of IDA in the capital market, and strengthened MIGA financial capacity.

Following 18th April 2018, the combined financing arms of the World Bank Group are expected to reach an average annual capacity of nearly $100 billion between FY19 and FY30, benefiting all Bank Group members across the income spectrum.

“Through the historic agreement endorsed today, our shareholders have clearly demonstrated a renewed confidence in global cooperation, and we greatly appreciate this strong support from our member countries,” World Bank Group President Jim Yong Kim said. “This boost in capital was essential for us to advance our efforts to mobilize additional finance for development to meet the aspirations of the people we serve. Our shareholders have asked the Bank Group to step up our leadership role in addressing the multiple overlapping challenges of our time, and this capital package allows for greater responsiveness to risks to global stability and security, particularly in poorer countries and fragile states.”

The Development Committee also accepted the recommendations of the Shareholding Review completed earlier this year. These included a Selective Capital Increase (SCI) for IBRD which will result in rebalanced shareholding and reduce extreme under-representation while continuing to deliver increased voice and representation for emerging markets and developing economies in manageable steps. The recommendations also included an SCI for IFC, which will result in a more closely aligned voting power between the institutions of the World Bank Group and will contribute to the IFC capital increase.

In addition, shareholders reiterated their commitment to the twin goals of ending extreme poverty and boosting shared prosperity and to the four key priorities that the World Bank Group’s Forward Look established: (i) stay engaged with all clients; (ii) lead on the Global Public Goods agenda; (iii) mobilize capital and create markets; and (iv) continually improve effectiveness and the internal operational model.

The Development Committee communiqué noted the challenging environment in which the package was endorsed: “The capital package has been developed against the backdrop of a changing and increasingly complex development landscape. Despite impressive gains in recent decades, development progress remains uneven. Keeping up the pace of past progress and addressing emerging challenges will require sustained effort in the face of persistent global headwinds and structural changes to the global economy.”

The Development Committee welcomed the successful conclusion of the negotiations on the financial and policy package, and have asked the Board and management to submit draft resolutions to Governors by the end of June for approval by the Annual Meetings 2018.

About the World Bank Group

How Smart Cities Will Make Roads Safer, Cleaner, and Better

THE SIX KEY POINTS OF THE WORLD ECONOMY, ACCORDING TO ALLIANZ...

Entrepreneurs are emerging as the vital reckoning force in changing facelift...

Gulf region to expect a twofold business rivalry in form of...

3 pivotal steps for Financial Services Arena in boosting the Employee...

EBRD AND WATERFALL JOIN B2HOLDING IN INVESTING IN NPL PORTFOLIO IN...

MINISTRY OF ECONOMY AND DEVELOPMENT, ATHEX AND EBRD STEP UP SUPPORT...