Meydan City to get 382,000 refrigeration tons supply with “Empower” signing an agreement 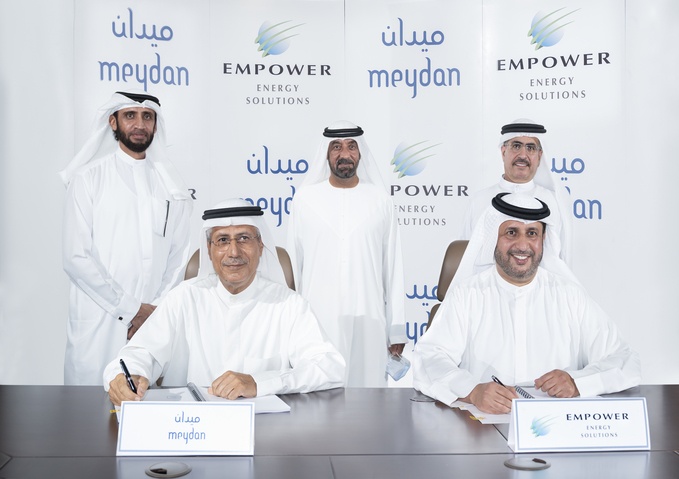 The Emirates Central Cooling Systems Corporation (Empower), global largest district cooling services provider, signed an agreement to offer the “Meydan City” project with a cooling volume of 382,000 tons of refrigeration to cover 750 buildings, and to attain the existing cooling plant for a total worth of 100 million dirhams. It was done In the presence of His Highness Sheikh Ahmed bin Saeed Al Maktoum, President of the Dubai Civil Aviation Authority, President of Dubai Airports, Chief Executive Officer of Emirates Airlines and Group, and Chairman of the Dubai Supreme Council of Energy.

His Highness Sheikh Ahmed bin Saeed Al Maktoum, Chairman of the Dubai Supreme Council of Energy, said that the district cooling industry represents a cornerstone in the sustainable development of modern cities, and competition in developing and providing services related to that industry to users with international standards is a legitimate and healthy issue that Dubai is keen on, whether with its investment climate or With its legislative and legal structure, in implementation of the directives of His Highness Sheikh Mohammed bin Rashid Al Maktoum, Vice President and Prime Minister of the UAE and Ruler of Dubai, may God protect him, in promoting sustainable development. His Highness added that the “Meydan City” project is one of the most promising development projects in the emirate, and one of the distinctive residential, commercial and tourist destinations, while “Empower” plays a prominent role in the environmentally friendly and energy-saving district cooling industry.

The agreement was signed by Ahmed Bin Shafar, CEO of Empower, and Essam Galadari, CEO of Meydan City Corporation, the master developer of the city, which is among the largest urban and development mega projects in Dubai.

The Corporation emphasized that the fresh supply and acquisition deal signifies the sobriety of its future plans for the refrigeration industry and a qualitative leap in its progress and prosperity process, the enlargement of its services and the increase in its market share to reach 79.5% in Dubai, which powerfully consolidates its local, regional and global supremacy as the largest provider of district cooling services in the world, and enhances its leadership In the eco-friendly and energy-saving district cooling industry.

The supply and acquisition agreement stipulates that Empower will provide the entire “Meydan City” with environmentally friendly district cooling services, and meet the needs of existing and under development projects, which will number a total of 750 buildings, most notably the “Meydan One”, “Meydan Avenue” and “Royal Pearl” projects, “Mohammed bin Rashid Al Maktoum City – District 1”, “Medan Horizon” and “Meydan Business Park”. Currently, Meydan Racecourse projects, which include Meydan Boat House, The Gallery, Meydan Hotel, Meydan Receiving Barn, DHL Building and others, are being supplied through the existing plant, which has a cooling capacity of 45,000 tons. Currently 25,000 tons.In addition, Empower will build 4 plants and a pipeline network to cover the required cooling capacity through investments totalling more than 1.

His Excellency Mohammed Ibrahim Al Shaibani, Chairman of the Board of Directors of Meydan City Corporation, said that the agreement is a strategic decision that allows Meydan to focus on its core business and enhances its commitment to ensuring the comfort and well-being of residents, tourists and visitors in the city. It also reflects Meydan’s confidence in Empower and its ability to provide city projects with cooling services. The regions are of high and cosmopolitan standards.

For his part, His Excellency Saeed Mohammed Al Tayer, Managing Director and CEO of Dubai Electricity and Water Authority and Chairman of Empower, said that the agreement comes in line with the vision of His Highness Sheikh Mohammed bin Rashid Al Maktoum, Vice President and Prime Minister of the UAE and Ruler of Dubai, to enhance the march of The green economy by achieving the objectives of the Dubai Clean Energy Strategy 2050, which aims to increase the production capacity of clean energy to 75% of the energy mix by 2050, and the Dubai Demand Management Strategy, which aims to reduce demand for electricity and water by 30% by 2030, and also increase dependence On clean and renewable energy sources, by increasing the area of ​​district cooling in the emirate and protecting the environment and natural resources by adopting Empower district cooling solutions that adopt best practices and technologies. The agreement enables both parties to carry out their duties to the fullest extent, and to acquire Empower.

Ahmed Bin Shafar, CEO of Empower, said: “We are proud of the new strategic partnership with a multi-investment institution with the weight of Meydan City Corporation. He explained that the acquisition of district cooling systems for “Meydan City” is the result of Empower’s keenness and diligence in insisting on excellence in providing district cooling services and its leadership in employing the latest modern solutions in the fields of artificial intelligence in operation, manufacturing and distribution to ensure the happiness of customers, protect natural resources and rationalize Energy consumption on the one hand, and an effective contribution to achieving the most important goal, which is to make Dubai the city with the lowest carbon footprint in the world, in accordance with the directives of the wise leadership that aims to achieve the outcomes of the Dubai Clean Energy Strategy 2050.”