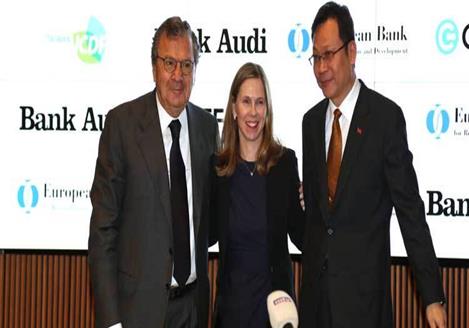 Strengthening sustainable energy in Lebanon, the European Bank for Reconstruction and Development (EBRD) and Bank Audi, the largest bank in Lebanon, are joining forces by providing US$ 100 million each for green projects. This includes the first loan under the EBRD’s Green Economy Financing Facility (GEFF) for the country.

The programme addresses critical issues for Lebanon’s sustainable development, such as diversifying energy supply, reducing the use of limited natural resources such as energy and water, and improving energy efficiency, thus decreasing pollution levels, conserving resources and contributing to a better environment.

Under the GEFF agreement with Bank Audi, signed in Beirut today, the EBRD is providing a US$ 90 million loan, to be complemented by US$ 10 million in concessional funding from the Taiwan ICDF, for on-lending to private borrowers. The funds will be used for investments in climate change mitigation and adaptation, in line with the EBRD’s Green Economy Transition approach, a comprehensive strategy to reduce greenhouse gas emissions and improve energy efficiency.

GEFF Lebanon will be supported by a team of specialised consultants including engineering, environmental, financial and marketing experts, who will offer Bank Audi and its clients direct support and advice throughout the green project lifecycle using best-in-class technology. The technical assistance package is supported by the EBRD Shareholder Special Fund.

Gretchen Biery, EBRD Head of Lebanon, said: “This GEFF facility to Bank Audi is the first offered to a commercial bank in Lebanon and the largest ever granted to a single bank in the region. The project demonstrates the EBRD’s commitment to creating opportunities in the green economy in Lebanon, and deepens our partnership with Bank Audi.”

Samir Hanna, Chairman and Group CEO of Bank Audi, added: “Our partnership with the EBRD in the GEFF facility demonstrates the commitment of both institutions to unlocking the Lebanese private sector’s access to green finance. The funding will allow businesses and individuals to invest in commercially viable and environmentally sustainable projects, thereby supporting Lebanon’s overall transition to a green economy. To that end, Bank Audi will match the GEFF facility with an additional US$ 100 million in financing to support green investments, bringing the total green financing package to US$ 200 million.”

Since 2006, through GEFF, the EBRD has provided almost €4 billion in green financing to more than 130 financial institutions, reaching 120,000 clients in 25 countries. These projects have led to annual reductions in CO2 emissions of almost 7 million tonnes.

In September 2017, Lebanon joined the EBRD’s southern and eastern Mediterranean (SEMED) region, which is currently the fastest-growing region of the Bank’s operations. The region includes Egypt, Jordan, Morocco and Tunisia, where the EBRD has been investing and has engaged in policy reforms since 2012, as well as the West Bank and Gaza since May 2017. In only six years, the EBRD has invested over €8 billion in 195 projects across the SEMED region, including five projects in Lebanon.

The EBRD also became a shareholder in Bank Audi in March 2018, with a 2.5 per cent participation in the latter’s common equity.

Within MENA territory how Gaming Industry is booming up

For the second round of funding for MENSAT region start-ups Falcon...

All Leaders and Directors Are Not Created Equal: To Save a...