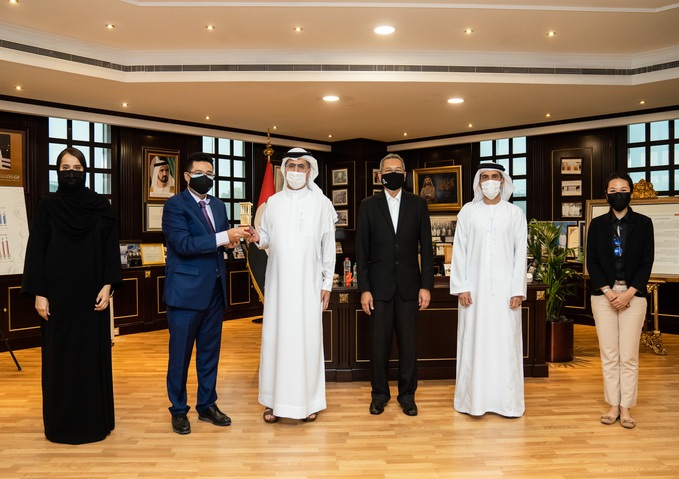 The meeting discussed bilateral cooperation between DEWA and the MGTC, under the umbrella of the Malaysian Ministry of Water and Environment.

“We have a clear strategy and specific targets to increase the share of clean and renewable energy in Dubai’s energy mix. One of its key projects to achieve this is the Mohammed bin Rashid Al Maktoum Solar Park, the largest single-site solar park in the world based on the Independent Power Producer (IPP) model, with a planned capacity of 5,000 megawatts (MW) by 2030,” said Al Tayer during the meeting.

Al Tayer highlighted DEWA’s key programmes and initiatives to achieve the vision and directives of the wise leadership. He highlighted DEWA’s contributions to the UAE’s efforts, which align with global efforts in fighting climate change and global warming.

Al Tayer also elaborated on the 300MW first stage of the fifth phase of the Mohammed bin Rashid Al Maktoum Solar Park that was inaugurated by HH Sheikh Mohammed bin Rashid Al Maktoum, Vice President and Prime Minister of the UAE and Ruler of Dubai. The fifth phase will have a total capacity of 900MW with investments totalling AED2.058 billion. The Solar Park’s projects constitute one of the key pillars of the Dubai Clean Energy Strategy 2050, which His Highness launched, and aims to provide 75 percent of Dubai’s total power capacity from clean energy sources by 2050. By the end of 2021, clean energy capacity will increase to 13.3 percent of Dubai’s total energy mix after adding 517MW from solar photovoltaic panels and Concentrated Solar Power (CSP) in the fourth phase of the solar park. These include 100MW from the world’s tallest CSP tower at 262.44 metres, 200MW from the first project of the parabolic trough, and 217 MW using photovoltaic solar panels.

Al Tayer highlighted the Green Hydrogen project, which DEWA commissioned at the Mohammed bin Rashid Al Maktoum Solar Park. The pilot project, which is the first of its kind in the Middle East and North Africa, is a promising and eco-friendly energy source. Green hydrogen is produced by water electrolysis using renewable energy. It represents one of the pillars of a sustainable future that depends on accelerating the transition to carbon neutrality to support a green economy by developing the green mobility sector, and reducing carbon emissions from industries.

“DEWA’s assets reached AED 190 billion. Its installed capacity has reached 13,200MW of electricity and 490 million imperial gallons of desalinated water per day (MIGD) to meet the increasing demand for energy and water in Dubai. DEWA has shares in companies and organisations it contributed to establish.  DEWA’s financial strategy includes providing the necessary resources to finance planned projects and meet its needs, based on priorities in the short and long terms to keep pace with the Dubai Strategic Plan, implement DEWA’s strategic and operational plans, in addition to commitment to the governance system, following the directives of the Dubai Government and adhering to the best financial standards. DEWA’s business portfolio and sources of income are diversified through companies related to its core business and contribute to achieving its strategic goals. Key organisations include Digital DEWA, the digital arm of DEWA, which includes Moro Hub Data Integrated Solutions, and the Green Fund, an investment fund that serves clean energy projects.

“As a globally leading sustainable innovative corporation, DEWA has made unprecedented achievements locally and globally. For example, the UAE, represented by DEWA, has maintained its first global ranking for the third year in a row, with scores of 100 percent in all Getting Electricity indicators in the World Bank’s Doing Business 2020 report. DEWA has reduced its customer minutes lost to 1.66 minutes, compared with 15 minutes recorded by leading utilities in the European Union and the USA. DEWA has further reduced its power transmission and distribution network losses to 3.3 percent, compared to 6-7 percent in Europe and the USA. DEWA’s water network losses have decreased to 5.1 percent, compared to 15 percent in North America, making it one of the lowest in the world. DEWA improved the sustainability of its water and power infrastructure, to increase fuel consumption efficiency up to 90 percent, and generation efficiency by 33.41 percent between 2006 and 2020,” added Al Tayer.

Al Tayer also said that DEWA has connected 6,800 solar systems in buildings in Dubai with its electricity grid, with a total capacity of 338MW. This is part of the Shams Dubai initiative to install photovoltaic solar panels in houses and buildings. The initiative supports the sustainable development of Dubai. He noted that DEWA has adopted the Reverse Osmosis technology for the desalination of seawater. This is part of its efforts to depend fully on clean energy for water desalination by 2030.

Al Tayer noted that DEWA adopts innovation, the latest disruptive technologies and the Fourth Industrial Revolution applications to enhance its resilience and capacity to provide solutions that facilitate people’s lives and involve them in achieving sustainable development and reducing the carbon footprint.

Shamsul Bahar Mohd Nor introduced the MGTC’s area of work as the implementing agency for Malaysia’s participation in Expo 2020 Dubai. He also expressed his interest in DEWA’s pioneering projects in clean and renewable energy.

“The aspirations of the Malaysian Green Technology and Climate Change Centre (MGTC) and Dubai Electricity and Water Authority (DEWA) to drive the responsibility to conserve natural resources and protect global ecosystems are completely aligned. We believe that the collaboration between MGTC and DEWA will strengthen and promote our objectives and goals in delivering solutions in combating climate change, as well as support and enhance both organisations towards planetary health and green growth. Our participation at Expo 2020 Dubai is indeed connecting minds and creating the future. Moving forward, MGTC is looking towards enhancing technological exchanges and capacity-building in the area of sustainable innovations with DEWA,” said Shamsul Bahar Mohd Nor.