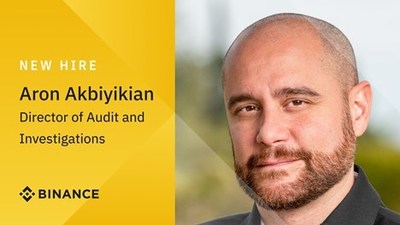 The global leading Blockchain as well as Cryptocurrency infrastructure provider, Binance, has roped in the expertise of Aron Akbiyikian as the New Director of Audit and Investigations wing.

Past Expertise and Profile: –

Aron Akbiyikian stated, “”I had to withdraw from law enforcement after an unfortunate helicopter accident that broke too many bones to continue that career. That was the catalyst for me to join the crypto world and I really consider myself lucky to be able to continue. helping to make the world a better place through that and I look forward to continuing this work at Binance.”

“Every time we work to remove the world’s worst elements from the crypto ecosystem, we are helping to secure the entire space. No one wants to be associated with the perpetrators of heinous crimes, and getting them out of crypto keeps users out of crypto. safe from being inadvertently associated with them. At the same time, crypto users can feel more confident that they and their loved ones are less likely to be victims of certain crimes, due to the efforts of many dedicated people who are trying to make the crypto space, and the world, more secure.”