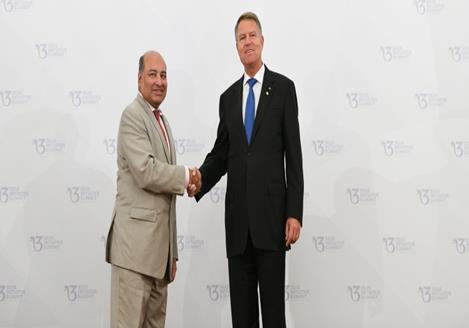 The EBRD stands ready to scale up its investment in Romania, the Bank’s President, Suma Chakrabarti, said during a visit to Bucharest which he concluded today.

The EBRD, a leading institutional investor in Romania, has invested close to €8 billion in the country to date. In 2017 alone, the Bank invested €550 million.

President Chakrabarti said: “We see large potential to further ramp up investment here. Romania is growing at the fastest rate in the European Union (EU). To support economic growth and help income levels converge with those of more advanced EU economies, the country needs major investment to expand, upgrade and maintain its infrastructure.

“The EBRD is more than happy to finance well-designed projects in road and railway infrastructure, and restructure and help privatise state-owned enterprises.”

To this end, President Chakrabarti urged the authorities to step up reforms which would unlock infrastructure development.

He praised the Constanta-based water utility RAJA as an example of a successful transformation in municipal infrastructure. Since 1994, the EBRD has provided over €60 million in financing to the company, helping it to become Romania’s largest and most developed regional water and wastewater operator, serving three million people in eight counties.

During his visit, the President signed a new €25 million loan agreement with the utility to support the further expansion of their services and to reduce water losses.

Infrastructure development was also a focus of the Three Seas summit hosted by Romanian President Klaus Iohannis. Three Seas is a regional initiative to strengthen trade, infrastructure, energy and political cooperation in central Europe. The summit, which also included a business forum, discussed a shortlist of key cross-border projects in 12 countries bordering the Baltic Sea, the Adriatic Sea and the Black Sea.

President Chakrabarti said at the summit: “The EBRD is well placed to support the full range of projects required to deliver on transport, energy and digital connectivity in the region of the Three Seas. We have a variety of instruments to offer, including PPPs, co-financing with EU funds and large private sector syndications.”

His visit also included discussions with representatives of the business community and the signing of a €5 million loan agreement with local car rental services provider Autonom.

In addition, the President pledged the EBRD’s support for growing the tourism potential of the National Museum of Art of Romania and delivered a lecture at the Bucharest Academy of Economic Science, which awarded him an honorary doctorate five years ago.

For relaxing regarding the COVID-19 blues, majority of Middle East Businesses are turning towards Cloud Platforms

Businesses to flourish all thanks to the latest Finance sector boom...