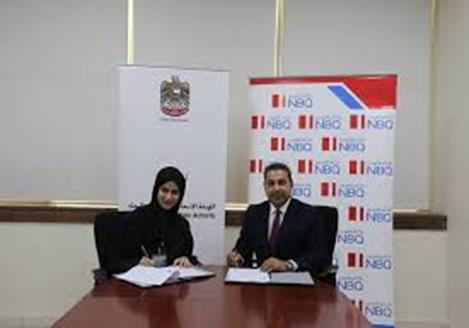 Federal Electricity and Water Authority has signed a new cooperation and partnership agreement with National Bank of Umm Al Quwain, under which the Bank will provide bill payment services to its customers through its various branches inside and outside the UAE. The agreement was signed by Sheikha Murad Al Blooshi, Director of Revenue and Credit Department and K Balasubramanian, Deputy Director General of the Bank.

Al Blooshi stated that as part of FEWA’s endeavor to improve the quality of its services and achieve its customers’ happiness by working on a number of initiatives, including the establishing new partnerships, it has already signed a number of agreements with several banks operating in the United Arab Emirates in order to provide more payment channels to its customers. It is expanding the scope of partnerships by signing a new agreement with NBQ to add more payment channels offered by it to its customers inside and outside the UAE.

Mike Tufail, Head of Retail Banking at National Bank of Umm Al Quwain said: “We are delighted to have signed this agreement with the Federal Electricity and Water Authority. This is a tangible example of the importance of partnership and cooperation between the public and private sectors, and this will allow FEWA’s customers to pay their bills in an easy way by using the Bank’s numerous electronic services.

For bolstering and building up a Competitive Economy in MENA, Saudi Arabia Start-ups anchoring in pivotal role

INDIAN CURRENCY IN DOLDRUMS-PATH FOR RECOVERY

The Connectivity plays an integral role as Governments are pushed for bridging the digital...

Tech Start-Ups in Abu-Dhabi to be getting huge boost up in form of timely...

The Saudi Arabia as well as UAEs Private Economies back on...