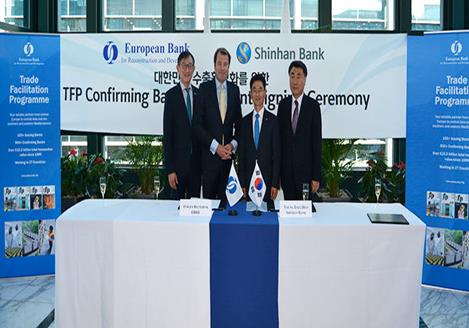 Shinhan Bank, one of the largest banks in the Republic of Korea, has joined the EBRD’s Trade Facilitation Programme (TFP), a framework to promote trade with countries across the three continents where the EBRD invests.

Participation in the TFP will allow Shinhan Bank to guarantee the payment of letters of credit and other trade finance instruments which have been issued by TFP partner banks in EBRD countries of operations to exporters of Korean products.

The Republic of Korea is a founding member of the EBRD and an important donor to the Bank’s work. It is a valuable source of foreign direct investment, with joint Korea-EBRD investment at €1.8 billion as of January 2018.

Since the TFP began in 1999, the EBRD has financed more than 22,500 foreign trade transactions for a total of more than €16.5 billion. Currently over 100 issuing banks in 26 countries participate in the programme, together with over 800 confirming banks and their subsidiaries around the world.

The TFP has supported 360 export and import transactions for Korean companies for a total €367.71 million, for transactions which were initiated by banks in the EBRD countries of operations and confirmed by banks in both Republic of Korea and abroad. Eleven Korean banks and branches of banks have already joined the programme as confirming banks.

Shinhan Bank was ranked first in the Republic of Korea (and 68th globally) in the Top 500 Banking Brands list in 2017 compiled by The Banker magazine for the sixth year in a row and recorded the highest profitability in the industry for the seventh consecutive year. Shinhan Bank was also ranked first in asset quality for the third year in a row in 2017.

Despite the huge negative impact the current crisis had globally, UAE...

For Supporting its clients and boosting overall capacity of Banks within...