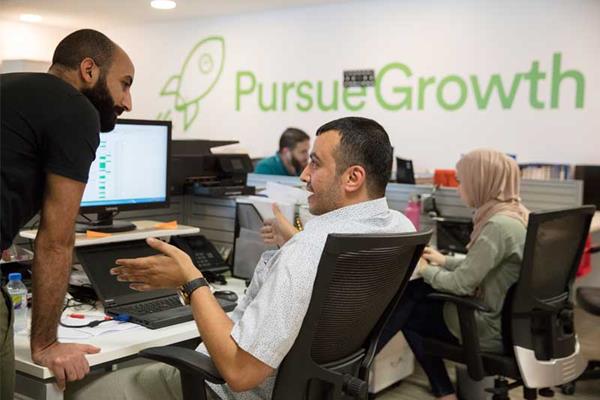 In Europe and the United States, tech entrepreneurs usually don’t have too much trouble getting their hands on the hardware. But for Ayman Arandi, who runs a start-up in the West Bank, importing even simple electronic components is an uphill battle.

“You have restrictions when you want to import or export,” says Arandi, co-founder of Iris Solutions, which makes high-tech calming rooms for children suffering from autism and post-traumatic stress disorder. “That gives us a lot of trouble.”

The experience of entrepreneurs like Arandi is highlighted in a new report from the World Bank Group and the World Economic Forum. The Arab World Competitiveness Report finds that start-ups in the Middle East and North Africa (MENA) face a host of often-debilitating hurdles.

Many struggles to get essential equipment, break into new markets, and secure business licenses. On a societal level, those obstacles act like a brake on economic growth, the report says. By making it easier for entrepreneurs to get their businesses off the ground, MENA governments could create jobs, spark innovation, and fight poverty, the report concludes.

“We are going through major technological change,” says Najy Benhassine, a director in the World Bank Group’s Finance, Competitiveness, and Innovation global practice. While that creates tremendous opportunities, “the entrepreneurial ecosystem needs to be improved to allow entrepreneurs to grow and prosper,” he adds.

Investing in the Future

The report comes as many Arab countries are looking for ways to tackle unemployment and jump-start their economies. Twenty-seven percent of young people in the region are unemployed and with MENA’s population expected to double to 700 million by the end of the century, job creation will be crucial, the study says.

Although challenges remain, the study notes some improvements in the economic environment affecting entrepreneurship. Governments, especially in the Gulf Co-operation Council, have launched efforts to provide crucial seed funding to start-ups. That includes Saudi Arabia, which created a $1 billion fund to invest in small and medium enterprises. Bahrain and Oman have both launched $100 million-plus initiatives to support start-ups, and Lebanon aims to inject as much as $600 million into innovative firms.

“Governments are realizing that start-ups are the future—and this is where they need to invest their money,” says Marie-Therese Fam, the managing partner of Flat6Labs Cairo, a venture capital fund. To keep that momentum going, the report recommends that governments continue to support small and medium enterprises (SMEs), which create four out of every five new jobs in emerging markets. It urges governments to encourage innovation, improve Internet infrastructure, pass laws that make it easier for SMEs to access loans, and invest in education—especially in up-and-coming fields such as information technology.

That will help prepare young people for jobs in the digital age, says Benhassine. “The nature of work is going to change in the Arab World. Digital knowledge will be absolutely critical.”

It could also help heal some of MENA’s wounds. More than 10,000 adults and children in the West Bank and Gaza now use Ayman Arandi’s sensory rooms, which have been a lifeline for many in an enclave with a history of violence.

“When you see the result in the kids, that’s the best thing ever,” he says. “That’s the biggest motivation right there.”

Despite the toughest phase of the era prevalent VC experts predict...

Saudi Arabia based Start-Ups witnesses an overall 82 percent jump in...

Post the COVID-19 blow out, UAE based Entrepreneurs have shifted their...

EBRD INVESTS €2 BILLION IN SOUTHERN AND EASTERN MEDITERRANEAN REGION IN...

Academia and industry join forces to diversify fuel sources for a...