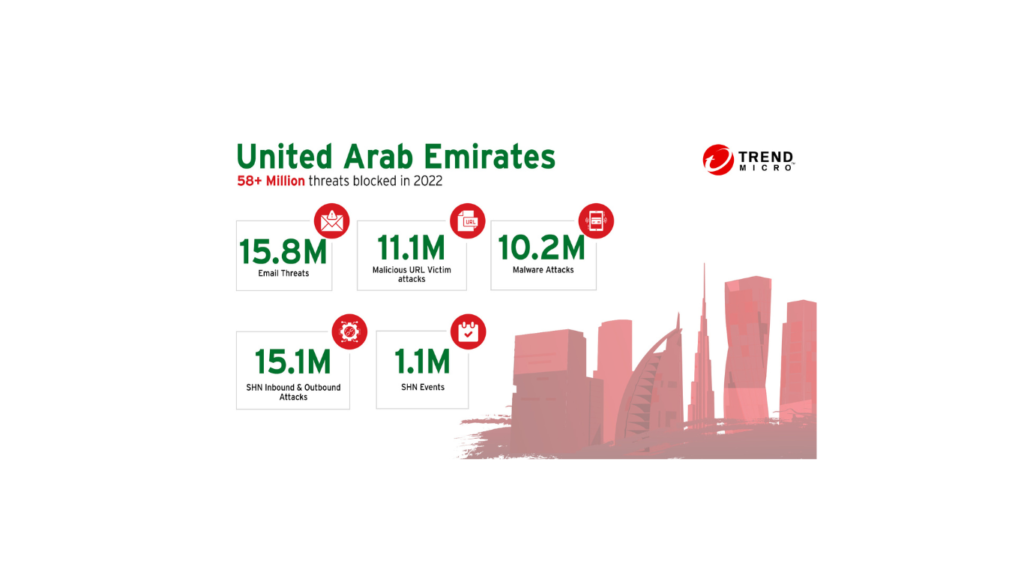 Detection of attacks from ransomware-as-a-service (RaaS) surged in the first half of 2022. Major players like LockBit and Conti were detected with a 500percent YoY increase and nearly doubled the number of detections in six months respectively. The RaaS model has generated significant profits for ransomware developers and their affiliates. According to the data, Trend Micro blocked 63 billion threats in H1 2022, there were 52% more threats in the first half of the year than in the same period in 2021, while government, manufacturing, and healthcare were among the top three sectors targeted with malware.

In the UAE, Trend Micro solutions detected and blocked over 15 million email threats, prevented more than 11 million malicious URL victim attacks, and over 122K URL hosts. In addition, over 10 million malware attacks were identified and stopped.

“While the findings of our midyear report are alarming, they highlight the modern sophisticated cyber criminals emerging in the UAE, urging organizations in the country to re-evaluate and protect their digital assets,” said Majd Sinan, Country Manager, Trend Micro UAE. “This is why it is critical for enterprises to utilize these latest insights that can significantly strengthen their efforts of safeguarding digital infrastructures against threat actors and their illicit activities.”

There are new ransomware groups emerging every day. In the first half of 2022, Black Basta was the most notable. Even though SMBs are a more popular target, many threat actors tend to go for large corporations. Vulnerability exploitation is a common ransomware attack vector. Unpatched vulnerabilities contribute to a growing digital attack surface that many organizations are struggling to secure as hybrid workplaces expand their IT environment. More than two-fifths of global organizations (43%) believe it is “spiraling out of control.”