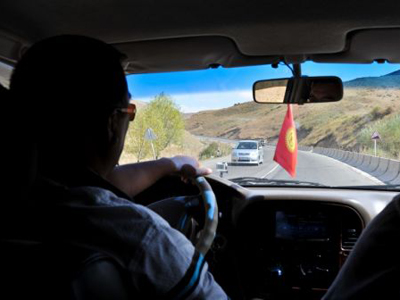 Air quality in Bishkek, the capital of the Kyrgyz Republic, is declining as more cars—among them many second-hand models from Europe, the US, and Japan—pour into the city.

Electric vehicle (EVs) could be the solution. They generate no tailpipe pollution, and most of the Kyrgyz electricity is from hydropower, so net pollution could be almost zero.

While the country has excess electricity during the summer months, it imports close to $1 billion in oil products, mostly during the winter months. EVs could run on that extra excess power and save the Kyrgyz Republic a lot of badly needed hard currency by reducing oil imports.

But if this all makes sense, how can EVs take off in Bishkek? There are only a handful of EVs in the whole country, due to 3 main reasons.

HOW CAN EVS TAKE OFF IN BISHKEK?

It would be easy to educate an average car owner with data showing how an EV can slash car operation costs by more than 80%. A gas-powered car running for 50 km a day consumes about $50 worth of gas a week, compared with less than $2 of electricity for an EV.

Second, prospective EV owners worry about the location of charging stations and related infrastructure. This can also be resolved by communicating the fact that globally, most electric car owners charge their car at home. A simple 240V connection is enough, like charging a mobile phone at night but with a bigger cable. A typical charger costs about $300-$400 and may cost another $50 to install in the case of Bishkek.

Third, it’s true – EVs are expensive. While experts keep telling us that by 2020 they will cost the same as gas-powered cars, most people in Bishkek can only afford old imported models.

It thus seems clear that for citizens of Bishkek, the dream of owning an EV will probably have to wait more than 5 years, until second-hand EVs become affordable in the local market. That won’t happen, some argue, at least until 2030 when the People’s Republic of China, India, and the European Union move to 100% EV production.

So, is there no alternative to waiting? How do we leapfrog to EVs in the Kyrgyz Republic, and make the country the hub for EVs in Central Asia?

LEAPFROGGING TO EVS IN KYRGYZ REPUBLIC IS 2-STEP PROCESS

The government can step in to give consumers more options. In fact, if we look closely, there are 2 immediately available solutions to achieve this goal.

First, targeted fiscal incentives to reduce the cost of EV ownership. A financing framework could be established whereby the consumer pays less taxes for an EV reducing the upfront cost, and then pays for the EV as a rent-to-own scheme from the savings on operation costs. This way, EV ownership could cost as little as $2,500-$3,000 a year, or $15,000-$20,000 over 6 years.

But it may still not be enough.

A second step would be for Kyrgyz companies to invest in converting or retrofitting old cars with electric engines. This would be the best way to create a local EV market, almost from scratch.

The technology is cheap and readily available. In fact, as EVs are becoming cheaper, conversion companies are struggling to find business. Combining these two trends to build an EV retrofit industry makes sense for the Kyrgyz Republic.

Retrofitting cars sounds expensive. It is – unless you do it at scale. After checking with independent battery suppliers based on this table of typical cost, I found that prices for a large-scale operation would be up to 30% lower.

A small factory can convert 6,000 cars a year, or 500 cars a month. It would employ in excess of two hundred highly skilled workers.

Rolling out 10,000 EVs could save the Kyrgyz Republic about a $10 million a year on gasoline imports. Once established, this industry could easily export cars back to Europe and Asia, and more importantly other countries in Central Asia.

But before all of this happens, the country needs a clear, comprehensive, long-term EV strategy that deals with the supply side too. The strategy should include regulations to prevent the second-hand market dominating EV sales and thus deterring local and foreign investment, and how to retrofit gas-powered cars in an environmentally sustainable way.

Supporting this industry could transform the Kyrgyz Republic into the region’s hub market for electric vehicles.

Despite the toughest Crisis demand For Real Assets- Stock And Gold...

The powered Energy giant ADNOC witnesses an AI for transformation of...

Thirdstream and EbankIT collaborating to enrich the account opening and onboarding...

Microsoft Word to use AI to boost writing

Emerging from the pandemic and meeting sustainability objectives – Facilities Management...